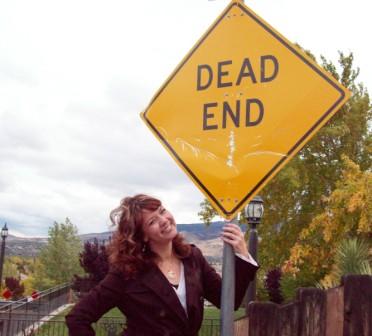 Now, if only I'd seen that sign before my walk down the aisle...

It was a throwaway line, one that he issued in a fit of rage. But it stung nevertheless.

“Didn’t you see the signs?” my future ex asked as I confronted him about the other woman, the brick, the connections between him and Marilyn at my children’s school (with my children present, btw).

(Hey, interesting tidbit: My kids knew about the “other woman” before I did. The day my ex left, they separately told me Daddy had been meeting with Marilyn for many weeks at the flag pole – and that they were already getting to know her and her children. Good times!)

But back to the stupid question of the day, which if this were a Sesame Street episode, would be brought to you by the letter “F” for “Fucked up”: “Didn’t you see the signs?”

I thought about it for a moment, staring dumbfounded at him. Um. Yeah. Not so much.

In fact, just two hours before, we had started the day with our typical wake-up ritual: I unraveled from our routine spooning position (“perfect fit,” he always said while wrapping himself around me), turned over and placed my head on his chest, and while listening to his heart beating, I whispered, “I hear your heart.” His response that morning, as it had been every morning before for the last 13 years: “It beats for you.”

The flashes continued. Hmmm. The signs, huh? Well, let’s see: He dated me for just shy of three years before marriage, so if he had wanted to return to Marilyn during that time, he had about 975 days or 23,400 hours in which to make that decision; he proposed to me; we spent every moment together as best friends; he told me every night that I was the love of his life, his perfect soul mate, and every morning, that his heart beat for me.

So there I was, staring at my best friend, the man with whom I shared a forever connection (or so I thought), and he was looking at me claiming he had been sending up signs the whole fucking time.

Kinda made me crazy at first. I started reliving every moment, looking for the signs. But then I thought, I should approach this as a scientist would…

So for the sake of argument, let’s assume he was sending up “signs.” That would mean we first need to decide on the definition of a “sign.”

According to Urban Dictionary:

sign, mark, token, note, symptom — a discernible indication of what is not itself directly perceptible.

Oooh. Ooh. Ooh! Tokens and notes are signs? Now that, I’ve got…

You see, turns out that I’m somewhat of a pack rat. But not the kind who needs to be featured on “Hoarders” or anything. To date, I have NOT started collecting creepy things like balls of hair that I free from the bristles of my brush, the foot-skin shavings from my Pedi Egg or my children’s lost teeth stored in a prescription bottle under my bathroom sink (um, well, actually, I may have that).

What I do collect is cards and letters. Always have, always will. As a writer, words hold special meaning to me, and the medium upon which they are written (cards, e-mails, the back of a napkin…) provide a physical snapshot of time. Memories may fade, but if he cared enough to send the very best…that becomes my keepsake.

So my quest for a sign can be found in the cards, notes and emails he’d sent over the years? AWESOME!

See for yourself: “Signs” in his own writing, in his own words, not coerced or forced through intimidation, withholding sex or chumming with tasty treats. Simply him showing me the crystal clear signs that he was miserable. With a capital “M.”

Sign #1 – A birthday card from right after we got married, so this would be an example of an early sign:

(Clearly, “my soul belongs to you” means that I am an evil bitch who stole it and refused to give it back, thus he will spend eternity with me as punishment. Clearly.)

Sign #2 – This one was an inscription in a journal he gave me to document our first child’s birth and early years, circa 1999: 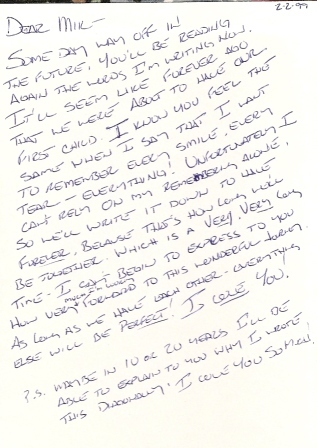 (Hard to read at times, I know, but I do love his reference to how “some day way off in the future,” we’ll be reading these words again…little did either of us know they’d appear on my blog! Also, just fyi, apparently my ex believes “forever” means 13 years, 15 days, 2 hours and 3 seconds. Give or take.) 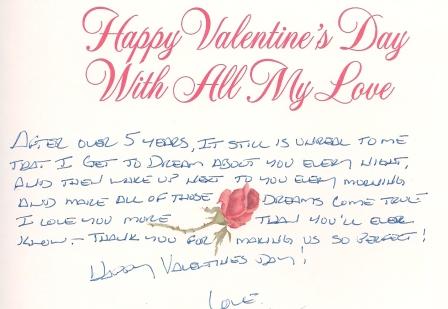 (“Thank you for making us so perfect,” obviously, means “You evil woman. I hate you and our lives together.”)

(So our souls were attached…with Elmer’s glue that wore off? Obviously not Super Glue, cuz that shit can secure a guy wearing a hard hat to an I-beam dangling off a skyscraper. While he madly gyrates his hips and tries to squirm loose.) 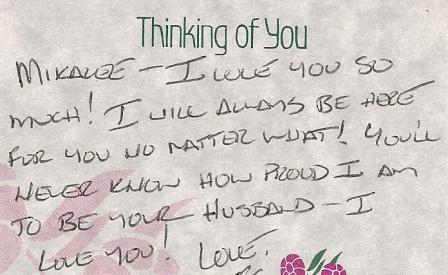 And finally: Sign #7 – Our final (10th) wedding anniversary. This was given to me August 16; I’m guessing he had already bought the brick, since the picture of the already-inscribed brick was sent in December. 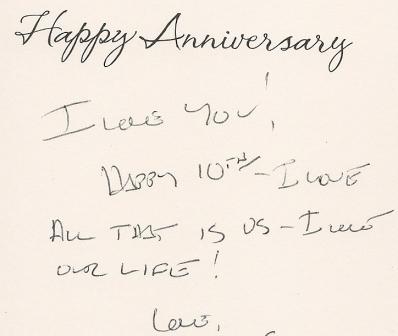 So obviously, these are but a sampling…of the scores of cards, letters, e-mails and such that he left me in the aftermath of our separation. And taken together, they are a clear sign that…There. Were. No. Signs.

None. And this is the hardest part to comprehend.

I have talked to many people — on Facebook, through this blog, in real life — who tell me their spouses left them, and they spent the subsequent days/months/years searching for the signs. I know I did.

But we, the leavees (not to be confused with “levees,” which also means “dike,” which I am not, thank you very much…) need to rest assured that often, the leavers leave no signs.

What they do leave behind are broken hearts, and in some cases, physical symbols of their once-love. And while love can and does change, those left behind never deserve to hear the words, “Didn’t you see the signs.”

I for one am grateful for these written reminders, because they paint a vivid picture — one that contrasts greatly to the story being told to my children. One day, when they’re both mature enough, my children will read dad’s own words, in dad’s own writing, and have a clear understanding of the lack of signs, too.

Now, your turn: Can you relate to this question … or to an equally inappropriate question issued at the end of a relationship? If so, please leave a comment.