I was breathless with excitement at the prospect of my children returning safely to my home and looking forward to a magical day.

Little did I know that there you were, driving up to my house in your sun-bleached, trashy, light blue, 80s-style, Toyota Corolla-ish crapcar. It was about 10 in the morning, just after I had completed a writing assignment and just before I was going to take a shower.

You parked in my driveway, and then two of you proceeded to come up to my door and start pounding the living shit out of it.

Because, you know, that’s totally going to make me want to open it and see who’s there.

Instead, I walked into my daughter’s empty room (whose second-floor window overlooks the driveway), spied your pile-o’-poop car, saw the guy who remained in the car and heard two of you conversing at my door while you pounded away.

I thought to myself, “Self,” (because that’s the crazy moniker I call me while addressing me in the second person), “…better not answer the door. There are three of them and one of you, and you don’t recognize them. And they seem awfully insistent, what the persistent pounding and such.”

Then suddenly, I heard something truly bizarre.

What was that sound you ask, dumbasses? It was the ominous sound of silence as the pounding suddenly stopped…followed almost immediately by the clatter of the two of you OPENING THE GATE TO MY BACKYARD.

“Hmmm,” I thought to myself. “Why would these people be coming into my backyard, I wonder?”

I then proceeded to the bathroom window that overlooks the walkway leading to my backyard, where I saw the two of you. On the other side of the private gate. IN MY BACKYARD!

“Perhaps it’s the guys here to mow my lawn,” I thought to myself, momentarily forgetting that I would have needed to hire “the guys” to actually “mow my lawn” in order for this to make any sense. “I’ll wait to see if they go to their teeny tiny little shabby car and pull out a giant lawnmower.”

Remember that time Mary Poppins pulled a coat rack out of her magical bag? I was imagining the exact same scene. Minus the talking birds, of course. And the magical bag.

But alas, you did not. Instead, I watched as you proceeded to pull out a pair of gloves. From the pockets of your black hoodies. (Yip. You can’t make this shit up.) And then put them on. And start sneaking around toward the back of my home, whispering the entire way.

“I guess I’m not getting a free mow today.”

But here’s what you didn’t count on: I am wise, connected and technologically savvy, you little boneheads. Because I have that modern techie marvel called an iPhone. Because I no longer have a landline, but my phone is always within close reach, right here in the pocket of my …

My phone. It’s not in my pocket.

“Self?” I second-personed myself again. “Where is that stupid modern technie marvel called my iPhone?”

I retraced my steps in my head. Before the front-door poundfest began, I had just been downstairs chopping veggies for a magnificent/healthful/tasty soup that would serve to welcome my adorable children home this afternoon.

Yup, downstairs next to the vegetables. That’s where my iPhone is.

Right next to my wide-ass open sliding glass door, welcoming in the gorgeous 75-degree breezes on this glorious Monday morn.

Now I was faced with a dilemma: Stay in my bathroom, lock the door, curl up in the fetal position, suck my thumb and wait to be fucking killed. Or run like the wind downstairs, close and lock the slider, grab my phone and run back to my bathroom perch.

I chose the latter.

I ran. Like the wind. Stealthily and sneakily, but fast and furious nonetheless. I bounded toward the slider, closed and locked it, grabbed that stupid modern techie marvel called my iPhone and feverishly dialed 911.

I then resumed my bathroom post overlooking you. You, Dicklips and Pumpkin Head, were still in sight, while Chad had apparently emerged from the crapcar and resumed pounding on my door – the obvious watchman in case I came home. Or decided to suddenly answer the door.

I then saw you, Pumpkin Head, pull out a knife. You walked toward the man door leading into my garage…

(An aside: Why the fuck are they called “man doors,” anyhow? Do only men go through them? Do women not warrant a door to themselves? Should I take this up with the ACLU? Should I not be concerned about this pesky detail at this point in my story, what with the knife and all?)

The knife. Oh yeah, back to the knife. And the hoodies. And the gloves. And the sound of you trying to pry open my dead-bolted door, the very door which is conveniently located right below the window from which I was watching you.

So I’m on the phone with 911 busting your sorry asses. The dispatcher gets a full description of two of the three of you (sadly, I’ve never actually seen Chad, only his hairy legs in the back of your car), and now she has assured me a couple of times that officers are “en route.”

Except I don’t hear sirens. I don’t see cops. And suddenly, I don’t see you either – neither your giant globe-head nor your friend’s greasy black hair peeking out from under his slimy black hood.

I’m stuck in my bathroom not knowing if you’re in my house? Or not? Because last I saw, you had a knife, you were trying to get into my man door and now you are gone. Poof. Like Mary Poppins again, this time after she snaps her fingers. Only minus the spoonful of sugar. And adding in nefarious intentions.

About 15 minutes of a full-on panic attack later, a cop shows up. A cop. As in, singular. With the gate to my backyard wide-ass open, he follows protocol and refuses to enter until back-up arrives. Not that he has a gun or anything. Or that I’m trapped alone in my house without a single way to protect myself.

So anyhow, I watched him from my bathroom window too, considering a friendly wave and maybe even holding up my fingers in the casual “Call me???” position. But I decided against and hid from him, too. I don’t know why, exactly. Just seemed the trend for the day.

After another 10 minutes, I see two motorcycle cops pull up, and the triumvirate — the holy trinity of fearless policeman posse-ness — enters my backyard.

But you have already fled. Cowards.

And I don’t know what spooked you. I’m not sure if you saw my purse sitting on the kitchen island and the pile of carrots and celery on the cutting board as you snuck around and peered through the sliding glass door that I had locked only moments before. I’m not sure if you heard my desperate pleas to the 911 dispatcher, asking her for fucking help. I’m not sure if you caught a glimpse of my giant eyes, watching you and your gloves and your knife and your smarmy demeanors from the window in my bathroom.

My very small bathroom. The one with the walls that were closing in on me. Because I’m claustrophobic AND being robbed by three knobs with a knife while I helplessly watch.

But what I do know is that you were gone by the time Reno 911 arrived.

(Actually, no disrespect to the police officers. I just love the fact that I actually live in Reno, and I actually called 911, therefore Reno 911 is entirely appropriate. If not evocative.)

And the posse’s verdict: The robbery was unsuccessful, with the only scars being from a knife to the man door.

“You’re lucky,” Lieutenant James “Jim” Ronald Dangle said (at least I think that was on his shiny gold name tag…). “You’re unharmed, and nothing is missing.”

And even though nothing seems to be missing, I do find myself without a few necessities these days. Namely:

But, Dicklips, Pumpkin Head and Chad, you have also given me a few things for which I’m oh-so-grateful, including by not limited to:

OK. Gotta go…I hear a car pulling into my driveway. Or maybe that’s the sound of my gate opening? Or just another piece of my already-broken trust, shattering still further.

Oh…and as a parting gift from The Universe: Guess what I found while driving near my home the very next day? 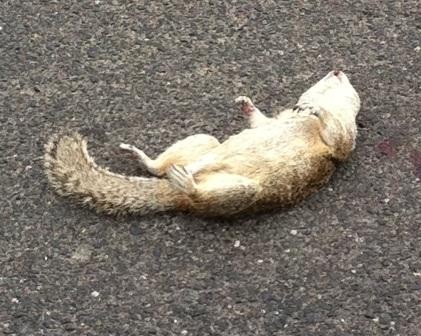 Road-fucking-kill. This is the third one, folks — in the last year. Funny, Universe…funny…

221 thoughts on “An Ode to Three Douche Canoes”