Me, from my 1991 High School Yearbook, touching Creepy Faceless Dude. Now you can easily understand why he was voted "Most Likely to Succeed" (at being creepily faceless, clearly...), but me???

Yip, that’s me on p. 233 of my senior year high school yearbook — a page that has haunted me for nearly 20 years.

There I was, sporting a ’do that can best be described as “poofy” and wearing a super giddy, 17-year-old smile because I was actually being ordered to cuddle with my then-crush (while silently imploring, “PLEASE don’t fail me now, Orchard Blossom scent Teen Spirit Deodorant…”).

And for the record, he did have a face at the time. The boy who henceforth will be called “Creepy Faceless Dude” for the purposes of this post still happens to be a friend — and happens to have a glorious wife, two perfect children and a thriving pediatric surgery practice. So I can’t imagine the show off successful doc would be a fan of his pic featured beneath the headline “Most Likely to Succeed…in Divorce?!?!”

(And by the way, is there something wrong with me that even in his creepy faceless state, I still find CFD oddly sexy?)

Anyhow, back to the point of this piece: Little did I know at the time of my photographer-mandated cuddle session that two decades down the road, I’d be facing the prospect of my 20-year high school reunion and wondering, “Um, ’scuse me… but what the hell did I succeed at?”

As of today, I now hold the honor of having the #1 “Shit Divorce” of all time in all of mankind according to Google’s billions and billions of web pages.

And guess who’s #2? Elin-freakin’-(formerly Woods)-Nordegren! That’s right, none other than Tiger’s ex.

Seriously. You don’t believe me, do you? OK, I’ll wait. Go ahead and open another browser window, head to Google and type in “Shit divorce.” There I am. Top of the heap. Numero uno. The big daddy of “shit divorce.”

So how did this happen, anyhow? According to Google, “PageRank reflects our view of the importance of web pages by considering more than 500 million variables and 2 billion terms. Pages that we believe are important pages receive a higher PageRank and are more likely to appear at the top of the search results.”

That’s me. I am officially “important” to the world’s largest, most frequently accessed search engine. Eat my Google dust, Elin…there’s a new divorcée in town, and she has an even shittier divorce than you!

And this ranking revelation got me thinking: What makes Elin and me #2 and #1, respectively? There must be some situational similarities that earned us so much symmetrical notoriety on Google.

With all these striking similarities, it’s painfully obvious why Elin and I are like shit-divorce soul sisters. But you may be wondering how exactly PageRank is determined in the first place. According to the masterful minds of Wikipedia (read: nerdy virginal balding middle-aged scientists), here’s just a snapshot of the endless algorithms used to determine who holds the pole position of PageRank: 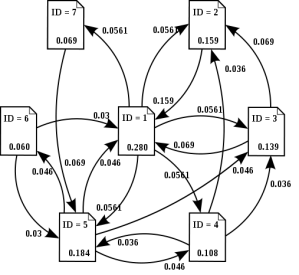 (Under section titled "Simplified Algorithm" on Wikipedia, describing PageRank. Seriously? "Simplified"? Are they trying to be funny?)

The clearly “For Dummies” description accompanying the algorithms and equations uses words like “column-stochastic” blah blah blah “eigenvector construction” blah blah blah and ends with “…a stochastic matrix and hence has an eigenvalue equal to one because of the Perron-Frobenius theorem.”

I = rock because I = #1 in Google PageRank for “Shit Divorce”

Most Likely to Succeed indeed. Just because Creepy Faceless Dude is the actual, real, bona fide inspiration for “McDreamy,” with his Seattle-based surgical practice and made-for-TV-life, I have no reason to be intimidated. Nope. Not me.

Because I have the #1 Shit Divorce. Ever.

So…like my medal? And I did not make it myself. Sheesh. Haters…

And I’m totally open to competition here. Do you think you deserve this medal more than I do? Please share your thoughts by leaving a comment below…

(Oh, and I’m totally open to congratulatory notes, too. I am, after all, drafting my acceptance speech as I type, and I don’t want to forget anyone…)