I’ve been seeing this list floating around Facebook recently. It features the names of 10 men, with the headline “The Top 10 Names of Men who Make the Best Husbands.” 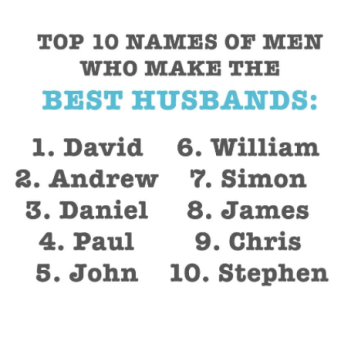 Seriously. Even TIME Magazine wrote about it. And TIME once linked to my blog, so hey — they must be experts.

So I perused it with great interest. Shockingly, neither of my ex’s names made the list.

Yet my father’s name? On it, and he’s been married for 51 years. As in, five fucking decades — plus one year for good measure.

My brother’s name? There, married for 21 years.

My high school crush who is now a high school teacher seemingly living a normal, lovely, delightfully stable life? There, and yeah, he’s married — to his high school sweetheart.

Now, keep in mind: I am certainly no indiscriminant believer. I don’t heed warnings in horoscopes, have never feared dying because I failed to forward a chain letter to 12 people and don’t believe tea leaves, the “science” of lines on my palm or Magic 8 Balls as predictors of the future.

But even you have to admit: That list of names? That’s some crazy shit right there. Maybe there’s some validity to the idea that people with certain names — highly traditional names, you’ll note — are more likely to have stable, successful, long-term relationships.

Which made me think: What if those of us with atypical names are born into chaos because of the sheer nature of our monikers?

What if it’s our birthright? Our signature, if you will?

So maybe, just maybe, there’s a list of names of people who are most likely to have their marriages end  — let’s just say — poorly?

If there were, here’s what I’m convinced it would look like. 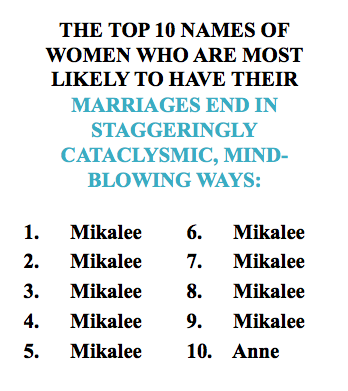 Anne. As in, the one who got all beheaded and whatnot. I suppose her story could compete with mine.

So I was at a meeting the other day, and a few of my colleagues were discussing how they happened to bump into their ex-boyfriends while they were mingling at a work function.

And I got to thinking: Both of my ex-boyfriends? They’re my ex-husbands.

Which further got me thinking: I’ve never had a normal breakup.

Both boyfriends — both resulted in marriages.

And both marriages — both resulted in epic blindsides, one with a brick, the other with handcuffs.

And not of the fun, kinky variety.

Let me put this another way: I have only truly broken up with two men in my life, and both are about as atypical as they can be.

Which THEN got me thinking (and yes, admittedly, I do a LOT of thinking these days) about the meet-cute.

You have heard of the meet-cute. Right?

You know, it’s that formulaic romantic comedy trope that allows two star-crossed lovers to somehow meet in a cute way.

So there’s the man and woman who both reach for the same pair of cashmere gloves, sparks fly, then they write their names in a book and decide if they’re meant to be, one will find that same book at some point in the future and solidify their destiny.

There’s the good-hearted hooker who, while trying to make rent for the month, gets propositioned by a jaded workaholic corporate raider to navigate Beverly Hills and learn how to drive a sportscar down Rodeo Drive.

There’s the ice salesman who walks into a general store during a snowstorm in the middle of summer in search of carrots for his best-friend-reindeer, who happens to encounter a woman looking for warm clothes in the same store who is searching for her sister in an effort to stop a magical eternal winter.

And all of this has made me come to a conclusion: I need a meet-cute, but totally opposite.

But I don’t need Nora Ephron to screenwrite this one. I just need a normal guy to tell me in a normal way that he’s just not that into me.

And really, this breakup-normal can be anything. I’m not picky. He can even utter, “It’s not you, it’s me.”

I’d be down with that.

In fact, here’s a possible list of seven acceptable breakup-normals. Any one of these would do just fine. Because in reality, every one of these is far more normal than my past breakups:

OK, that last one — perhaps a bit extreme.

But you get the point.

Or better yet: What if my breakup-normal has ME initiating the breakup?!?!

Perhaps I’m the one who falls out of love.

Or maybe I decide that I’m worth more.

Or what if I — gasp — happen to want to spend more time with me, not with him?

So, yes, my life is the stuff of screenplays. I’ve often lamented that I fear seeing Lifetime’s made-for-TV movie version of my life starring the always embattled, consistently tear-stained Meredith Baxter-Birney.

But someone needs to help with the end.

Because no one would believe the sheer weight of the breakups I’ve had. Plus, audiences crave that warm-fuzzy feeling at the end. And this story doesn’t really have one.

And yes, I see the inherent comedy of the fact that I’m thinking of the breakup. Because there’s not even a prospect of a meet-cute, meet-convenient or meet-in-any-way-shape-or-form in my future.

I mean, seriously. I’m such a total package. Who could possibly resist, what with my two exes (bonus point: one in PRISON!), two teens, one baby and enough baggage to fill every overhead bin on a Southwest jet?

But the fact is: I miss him.

And when I say “him,” I don’t necessarily mean I miss my ex. Though I’ll admit, in some of my darkest moments, I absolutely and wholeheartedly miss that man I used to know. The man to whom I never even said the words “goodbye.” The man who walked out of my house as my husband and now is my ex, without so much as a word between us.

But I miss holding hands. I miss getting a text with the words “Hey beautiful.” I miss hearing the soft sounds of breathing next to me in bed.

But if I do happen to meet “him,” perhaps I’ll save him the trouble and suggest the following haiku for our breakup-normal:

Oh how I loved you

My sweet and fair Mikalee

But we should break up.

Seventeen syllables of concise yet potent termination, with nary a stone shaving, engraved message, prison bar or orange jumpsuit in sight.

What a titillating prospect.

9 thoughts on “Screw the Meet-Cute. Can Someone Please Write Me a Breakup-Normal?”